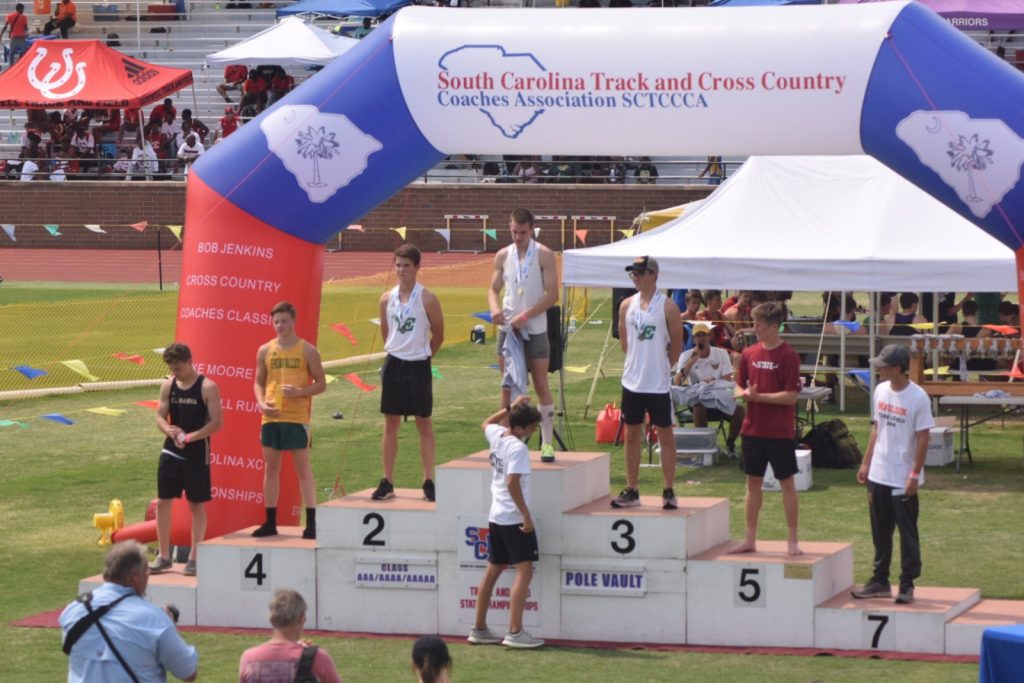 There was a lot of green atop the podium at the SCHSL State Track Meet on Saturday at Spring Valley High School when the 5A pole vaulters were recognized. EHS senior Taylor Boyles took second place and junior Taylor Fox was third.
For Boyles it was a bittersweet ending to a decorated high school pole vaulting career. Making his third trip to the state meet he finished seventh his sophomore year and was second last year. Hoping to claim a state championship his senior year, he came ever so close to fulfilling that goal. He was beaten by his competitor from Dutch Fork High School’s third attempt at 16’ when the crossbar came completely off the pegs up into the air and back down on them and stayed.
Saturday was Fox’s first trip to the state meet, having narrowly missed out at the State Qualifying Meet last year. Fox proved the moment wasn’t too big for him and equaled his PR of 14’6” from the previous week on his first attempt.
Both Boyles and Fox were named All-State Track and Field athletes by the SC Track and Cross Country Coaches’ Association. This is the second year in a row that Boyles was named to the All-State team as athletes must win the event or clear a minimum of 14’ in the State Meet to be named to the team.
The two pole vaulters’ combined 14 points in the meet allowed Easley High School to finish in 17th place among the 38 high schools competing in the 5A division.